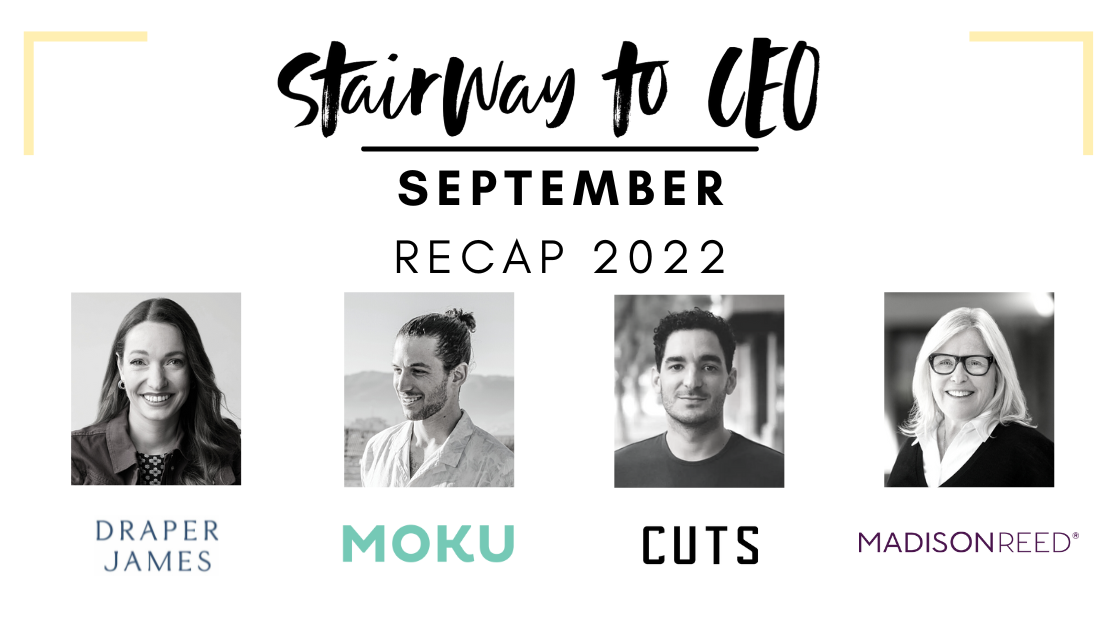 Welcome back to another monthly recap here at Stairway to CEO. The month of September feels like the longest month of the year, to me at least. But nonetheless, we had an incredible lineup of four amazing guests, with inspiring stories. Let’s jump in to see what they all had in common, some life lessons they had to share, and take a peak into what lies ahead for us in October.

‍
For our 122nd  Episode, Lee sat down with Erin Moennich, CEO of Draper James. Yep, you heard that right…the legendary lifestyle brand by Reese Witherspoon.

Draper James is a classic American women's lifestyle brand founded by Reese Witherspoon inspired by her roots in the south and named after her grandparents. Founded on the idea of making women feel great.

While we didn’t get to interview Reese, Lee did get to chat with CEO Erin Moennich, who has an incredible journey to becoming CEO. Erin shared what it was like growing up in the midwest, the different jobs she held before landing at Draper James, and why she believes failure should be named something else!

She also talked about why she thinks being a team player and being willing to get your hands dirty is what makes a great CEO, how she’s grown personally as a leader and has learned to be calm, and why she chooses not to look at things as failures but as learning experiences.

If you haven’t yet, be sure to tune in to Episode 122: Testing Over Failure, it’s an episode you won’t want to miss!

2. From Meetup to Meatless Jerky

‍
Walking into the second week of September, we heard from Matt Feldman, Founder and CEO of Moku Foods.

Moku Foods is a mushroom-based jerky, made out of king oyster mushrooms into a delicious tender jerky that looks and tastes like beef.

Matt shared how he partnered with a Michelin Chef to turn king oyster mushrooms into a delicious alternative beef jerky. In this episode, Matt talks about his childhood growing up in Hawaii, why he joined a vegan meetup in San Francisco, how he earned over 1 million views on YouTube, and how he's raised over $4 million for Moku foods.

“In fundraising, it's almost like you're swinging for a home run every time, but you know that you're probably not gonna hit it.”

The Stairway to CEO team also got the opportunity to try out Moku Foods. If you want to know more about the flavors and product itself, head over to our blog and get an inside scoop. And while you’re at it, tune into Matt’s episode!

3. Cutting up the Clothing Category

Heading into the middle of September, Lee chatted with Steven Borrelli, Founder and CEO of CUTS Clothing.

CUTS Clothing is a work leisure clothing brand, geared towards the athlete in the boardroom.

On a mission to find the perfect t-shirt, Steven started CUTS in 2016 and has since grown the business to a hundred-million-dollar company and created a new category, which he calls work leisure.

Steven talked about his childhood growing up in Washington state, to working at an advertising agency, and moving back home to start CUTS. He talks about how he got his first 1000 customers, how he leans on OKRs, and why he believes in blind faith.

“It’s super important to just be really focused on where you’re going.”

To hear more of Steven’s great advice, tune in to Episode 124!

4. From Funder to Founder

Continuing the month with a strong ending, we heard from Amy Errett, Founder and CEO of Madison Reed.

Madison Reed is the hair color company revolutionizing the way women color their hair using proprietary color matching technology, and a team of on-call colorists, Madison Reed helps women choose the perfect shade of hair color delivered straight to your door, or you can visit one of their 60 hair color bar locations throughout the U.S.

Amy shared her experience as a child being the peacekeeper of the family, her experience working as an investor at True Ventures and Maveron Ventures, how she came up with the idea for Madison Reed, and why she runs things by her astrologer first, before making any significant decisions.

She also talked about how they handled having to close their stores due to COVID, but their online sales skyrocketed, some of the big fundraising challenges she didn’t see coming, even with her background and experience in VC, and advice she has for aspiring founders and those struggling with raising funds.

“The infrastructure of scaling culture that is different and unique and disruptive is really hard when you grow.”

Letting Go of Fear and Failures

This month every Founder and CEO gave a glimpse into their past fears, and one of the common threads was the fear of failure. In their conversations with Lee, they each stated that failures happen but that we shouldn’t look at them as failures, but as something to learn from and grow from. Not just in business, but in all aspects of life.

Stay tuned throughout October to hear from amazing CEOs such as:

Don’t forget to subscribe to the show on Apple Podcasts, follow us on Spotify, or tune in wherever you listen to podcasts.

Have any guest suggestions, comments, or questions about Stairway to CEO? Drop us a line here! 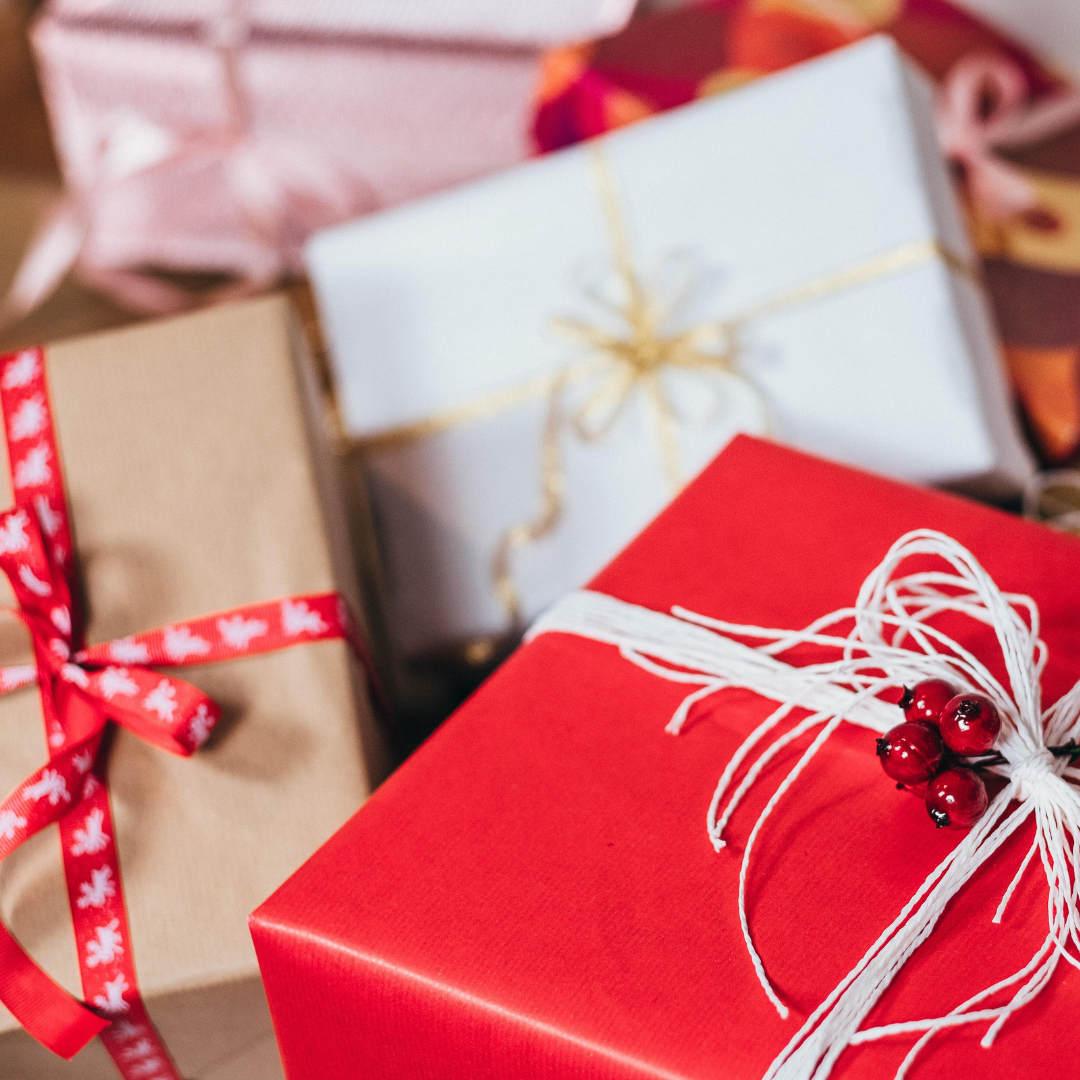 Welcome to the second edition of Stairway to CEO's Holiday Gift Guide! This year we have an even better list than we did our first go around last year, as we have added 52 brands to our guest roster. We’ve had an incredible year filled with some of the best interviews from top Founders and CEOs of today’s leading direct-to-consumer brands. We have a lot of amazing gift ideas for you and we’ll be sure to cover everyone you’re shopping for, so let’s get started! 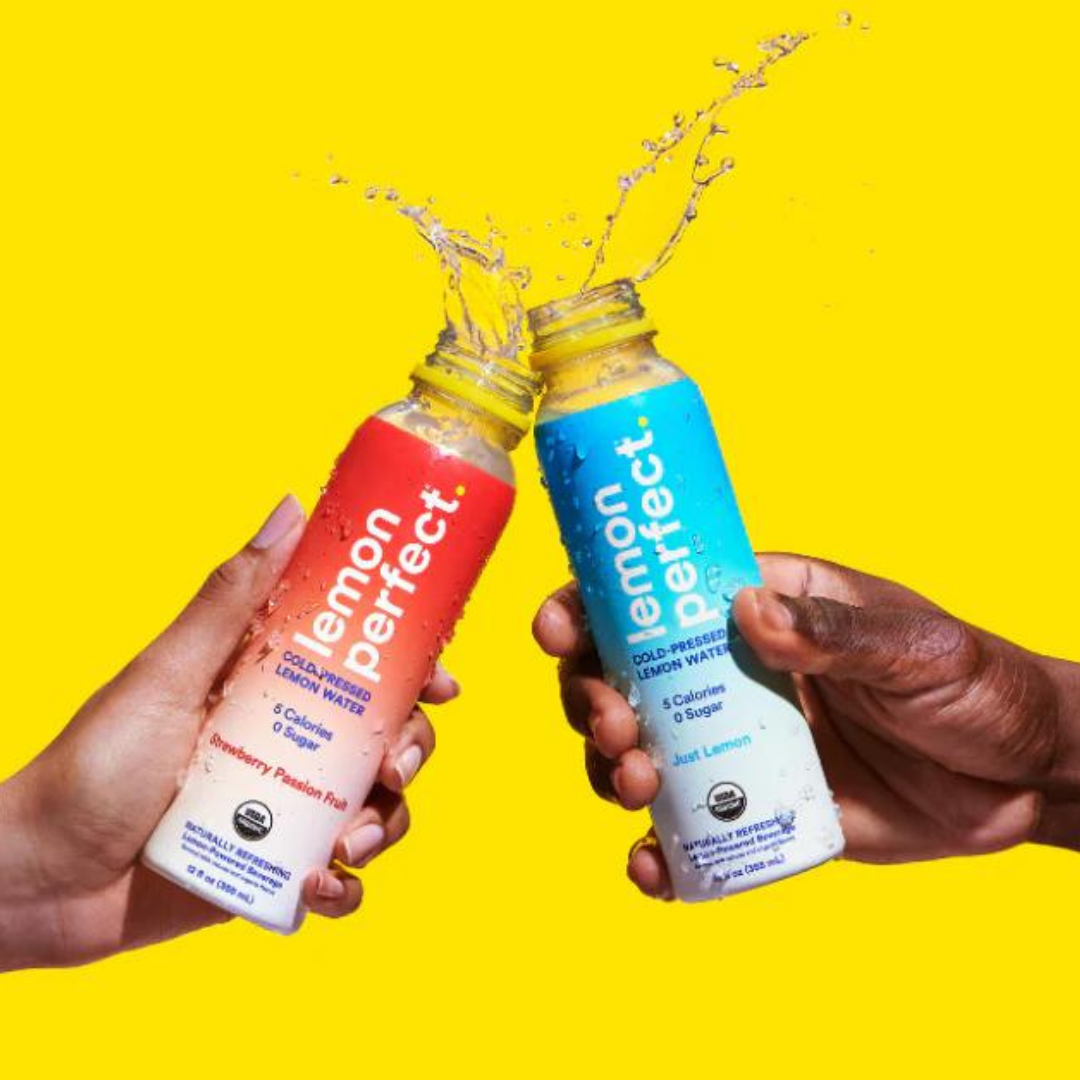 Back again with another product review but this week we’re reviewing a refreshing water that is quite…perfect! 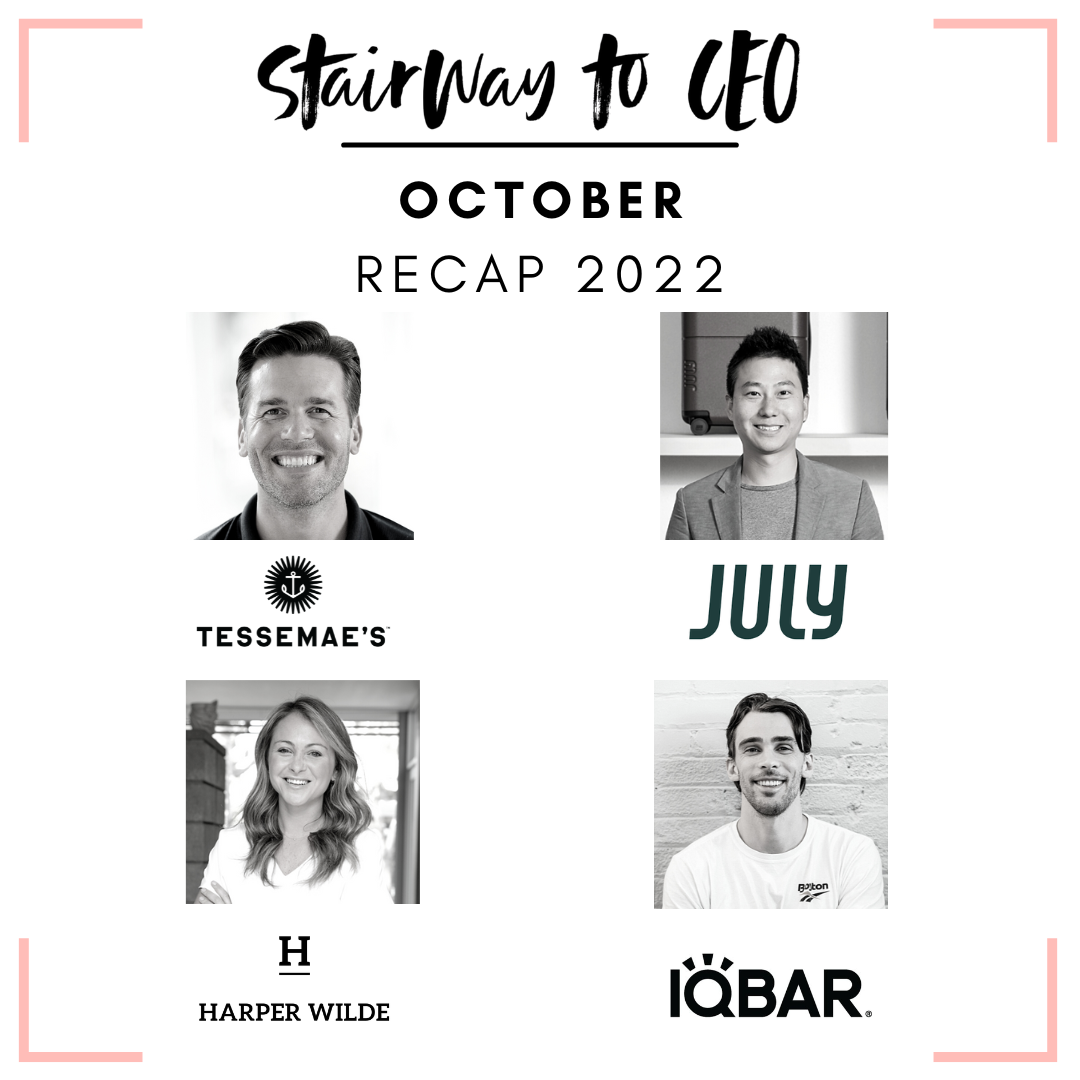 I can’t believe we’re nearing the end of the year. With only two months left, we’re entering the madness season with all the holidays, dinners, parties, and more. We hope you stick around for the exciting things we have planned here at Stairway, including our 2nd annual Top 10 Gifts of the year! Though we won’t be covering that today, we will be taking a look back at October and the four amazing guests we had on the show, while also taking a look into what November offers.