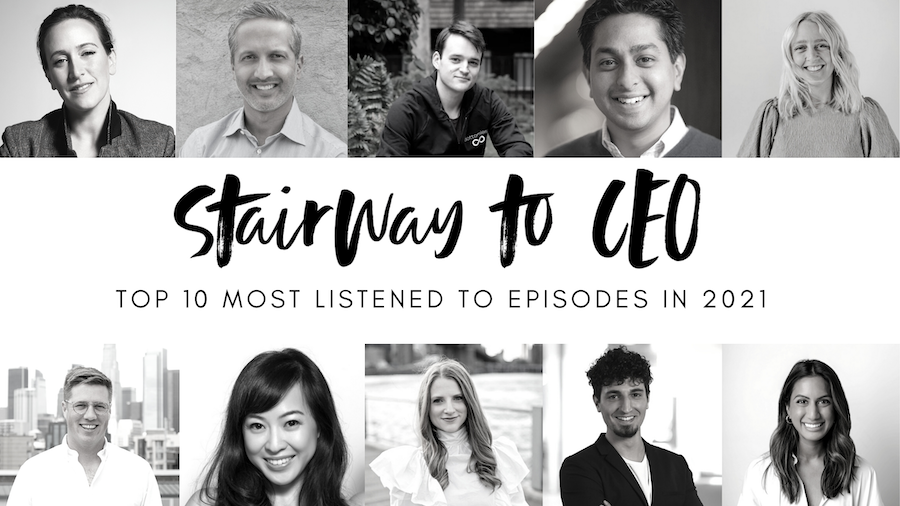 As we enter the beginning of 2022, we wanted to look back at the year we had at Stairway. What better way to do so then reminiscing on the Top 10 episodes that were most listened to in 2021. These episodes are ones chosen by YOU…our audience! Curious who made the list? Well let's find out!

Coming in at number one is Episode 70: Rolling in the DEUX with Sabeena Ladha, Founder & CEO of DEUX

Sabeena Ladha is the Founder and CEO of DEUX, a functional foods brand that believes good-for-you products should taste good. Made with high quality ingredients and enhanced with added boosts of supplements, their products are all vegan, gluten free, and taste delicious.

In this episode, Sabeena shares with us her journey from growing up in Texas as a first generation American, to building the venture studio known as Launch Pad at M13 in Los Angeles, to starting her own company DEUX on Instagram by taking orders via direct message and accepting payments over Venmo.

If you're interested in trying out some of the amazing DEUX products you will hear about in this episode, we have a special promo code for you. Just go to eatDEUX.com, and use the code CEO20 to get 20% off.

Our second most popular episode that was most listened to this year was Episode 43: Sun Up to Sun Down with Amanda Baldwin, CEO of SuperGoop!

Supergoop! is the first protective skincare brand that puts sunscreen at the forefront of everything, creating highly innovative, reef safe, feel good formulas that are developed for all skin tones.

In this episode, Supergoop! CEO, Amanda Baldwin, shares with us her journey from growing up as a gymnast, to starting her career in private equity, to transitioning into marketing and landing a job at Estée Lauder, to leading Supergoop! over the past four years, growing the company more than 10x and the team to over 50 people.

She talks with us about finding and growing talent, how morning runs are some of her best strategy sessions, and how she thinks about board meetings.

How could these delicious cookies not come in at third!?

In this episode, we dive into how Last Crumb launched only 11 weeks ago, they haven't spent a penny on paid media, they've been selling out in under 10 seconds each week, and how customers are scrambling to use Apple Pay simply to be able to place their orders faster for 140 dollar box of luxury cookies.

While nibbling on a Last Crumb cookie, Lee talks with Matt about the experiences he's had along his entrepreneurial journey that have brought him to where he is today, why he prioritizes experience first, brand second, and then sales at Last Crumb, and what he thinks his strengths are as CEO.

Episode 52: Growth You Can Sink Your Teeth Into with Neeraj Gunsagar, CEO of Byte

Neeraj Gunsagar is the CEO of Byte. Acquired by Dentsply Sirona for over a billion dollars in an all cash deal in less than three years, Byte is a top rated, mission driven leader, disrupting the dental industry by giving customers access to at home invisible aligners that deliver professional results in half the time and cost of competitors.

In this episode, Neeraj shares with us his journey from growing up in the Bay Area with immigrant parents, to studying business at Berkeley, to working at TrueCar for seven and a half years, where he transitioned from CRO to CMO, to meeting with Scott Cohen, the Co-Founder of Byte, for a marketing jam session which ended up turning into a CEO recruiting opportunity.

He talks with us about how his parents had an arranged marriage, how he's grown as a leader, why ego is the enemy, and why focusing on customer experience and capital efficiency has led to enormous growth at Byte.

Ooohhhhhh, we’re halfway there… and coming in at number five goes to Episode 45: From Fights to New Heights with Dylan Jacob, Founder and CEO of BrüMate

Dylan Jacob is the Founder and CEO of BrüMate. Based in Denver, BrüMate is the leading provider of direct to consumer insulated drinkware and coolers. Since launching in 2016, BrüMate has grown into a community of over two million customers, with more than 100,000 five star reviews and revenues exceeding 100 million dollars.

In this episode, Dylan shares with us his entrepreneurial journey from being bullied in middle school and overcoming challenges to get his life back on track, to selling his first company for $100,000, to launching BrüMate after discovering a void in the market for a 16 ounce, insulated beer cozy.

He talks with us about his rebellious childhood and how he bankrolled, as well as proved the BrüMate concept with his very first retailer.

It’s no surprise to us that a few months after this episode was released, Daily Harvest reached unicorn status. Tune in to learn more about this new billion dollar brand:

Rachel Drori is the Founder and CEO of Daily Harvest, a food delivery company that sells healthy and convenient frozen smoothies, bowls, plant based milks, soups, flatbreads and more. Daily Harvest helps you stock your home with delicious clean food that's created with real fruits and vegetables designed to keep up with your busy lifestyle.

In this episode, Rachel shares with us her journey from growing up as the youngest of five with entrepreneurial parents to working at American Express and Gilt Group, to realizing there was a lack of healthy and convenient food options, which sparked the idea for Daily Harvest.

She talks with us about how she got her business off the ground, the challenges she faced along the way, how she raised over 43 million dollars from investors, and how she managed to build a profitable business that reached over 250 million dollars in revenue in 2020.

Incoming in 7th place comes another brand that made our Top 10 Gift Ideas for 2021…Episode 73: Coffee at Scale with Michael Mayer, Co-Founder and CEO of Bottomless

Michael Mayer is the Co-Founder and CEO of Bottomless, the first smart coffee subscription. They help you build a custom coffee subscription, ship you a simple Wi-Fi scale to store your coffee on, and then send you your next bag of coffee in perfect time, never arriving too soon or too late.

In this episode, Michael shares with us his entrepreneurial journey from growing up in Oregon as a triplet with dreams of becoming an inventor like his uncle, to studying engineering and economics in college, to landing a job at Nike and experiencing challenges as a consumer with his wife around restocking their home, which led to the idea for Bottomless.

He talks with us about how they applied to YCombinator three times until finally being accepted, how his anonymous Twitter account helped him build relationships with investors and raise over $6.8M, and how he's grown the business to over two million in revenue.

Bottomless was also included on our Top 10 Gift Ideas for 2021!

Another popular episode this year is Episode 77: From Candy to Quintessentials with Sid Gupta, Co-Founder and CEO of Quince

Sid Gupta is the Co-Founder and CEO of Quince. By removing the middleman from the supply chain, utilizing M to C, Manufacturer to Consumer, Quince is an online destination for quality first essentials, including apparel and fine jewelry to home decor and kitchenware.

In this episode, Sid shares with us his entrepreneurial journey from growing up in the Bay Area, where he worked at Fry's Electronics, to joining a consumer and retail M&A group after graduating from the University of Chicago, to creating Lolli and Pops into one of the largest independent confectionery chains in the US, with over 90 stores serving over five million customers annually to launching Quince just three years ago.

Lee and Sid talk about how he's grown the company to include over 60 factories, his perspective on the future of retail, and how Quince got its name and why it was originally called Last Brand.

How could you not love listening to the story of how a luxury purse brand got started!? Episode 41: For Better or Purse with Coral Chung, Founder & CEO of Senreve

Named a top 50 brand in DTC by The Lead two years in a row, Senreve was founded by Coral Chung and is a global direct-to-consumer luxury handbag brand for the modern woman.

In this episode, Coral shares with us her journey from moving to the US from China at five years old, to working in investment banking and consulting, to having a spiritual experience that ignited her idea to launch Senreve.

She talks about her global vision for the business, how she thinks about setting expectations, and how she's grown as a leader.

If you’re looking to learn more about Senreve, you can check them out in our Gift Ideas!

Last but certainly not least on our Top 10 List of 2021 is Episode 48: Business Out of the Box with Chelsea Moore, Founder & CEO of BoxFox

Launched in 2014, BOXFOX is a modern approach to gifting, offering curated gift boxes or the ability to digitally build a custom gift box from a selection of products across home, beauty, lifestyle, and food.

In this episode, Co-Founder and CEO of BOXFOX, Chelsea Moore, shares with us her journey from working in PR and marketing to starting BOXFOX with her two close friends after wanting to send a gift to a sick friend and realizing the lack of options that existed for presentable, personal, and purposeful gift boxes.

She talks with us about partnerships with Nordstrom, Anthropologie, and The Bachelorette that helped move the needle for the business, how she's grown personally and professionally as a leader, and reveals some of the not so glamorous responsibilities that come with running a business.

And of course, we had to feature BOXFOX on our Gift Ideas list because who doesn’t love to personalize a gift box and fill it with everything you know your special someone will love?!

Is there a brand we missed that you wish would have made the list? Have a brand you want to see on the show? Let us know! 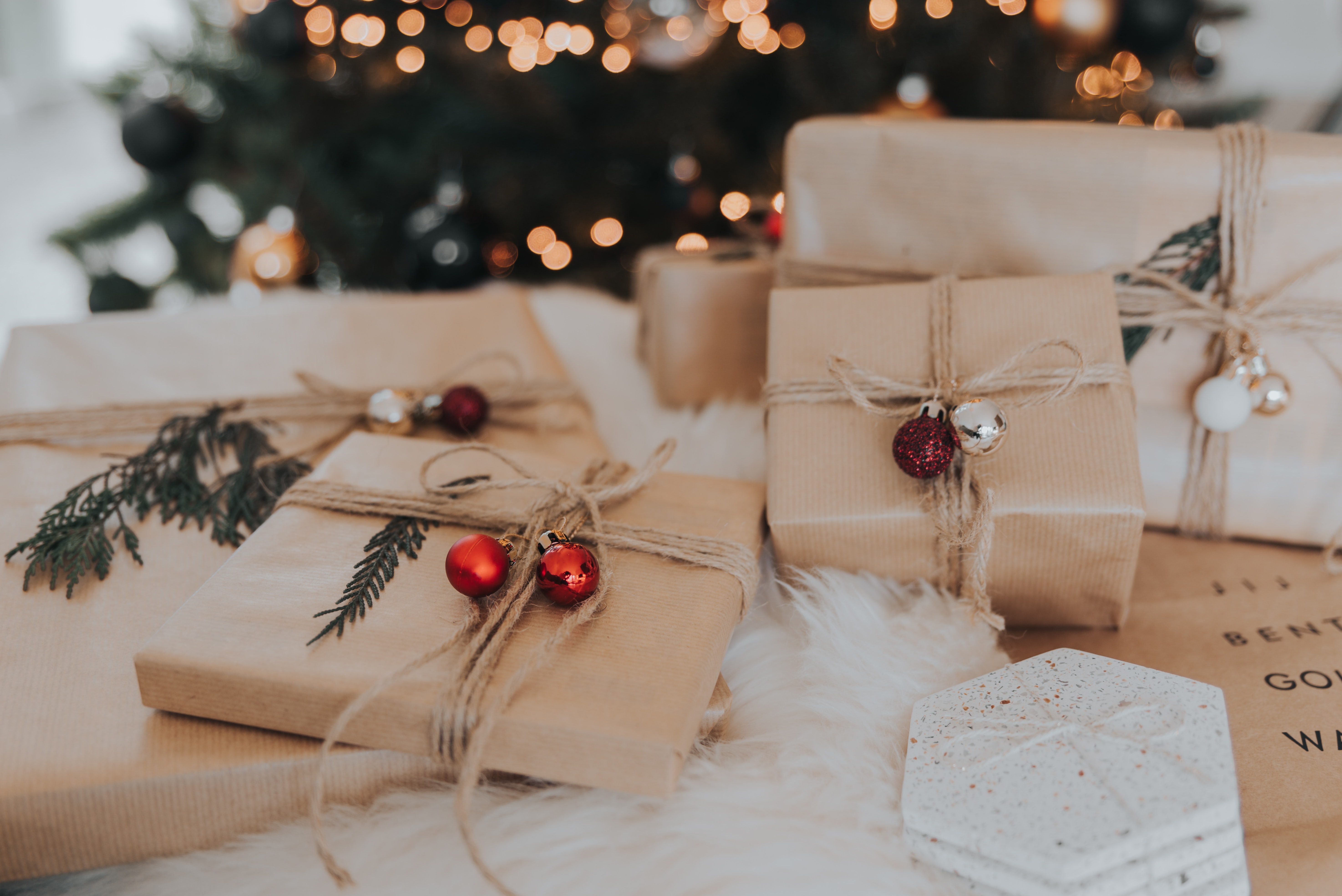 Here at Stairway to CEO we have a plethora of amazing brands that have been on our show which means lots of amazing gifts to choose from! So we wanted to wrap up some of the gifts we will be giving to our friends and family members this year, and believe me- it was incredibly hard to choose from our 80+ brands! We’ve hand-selected 10 brands that cover everyone on your list! The home chef, the makeup lover to the coffee lover, and even those that love luxury items! Let’s get to it! 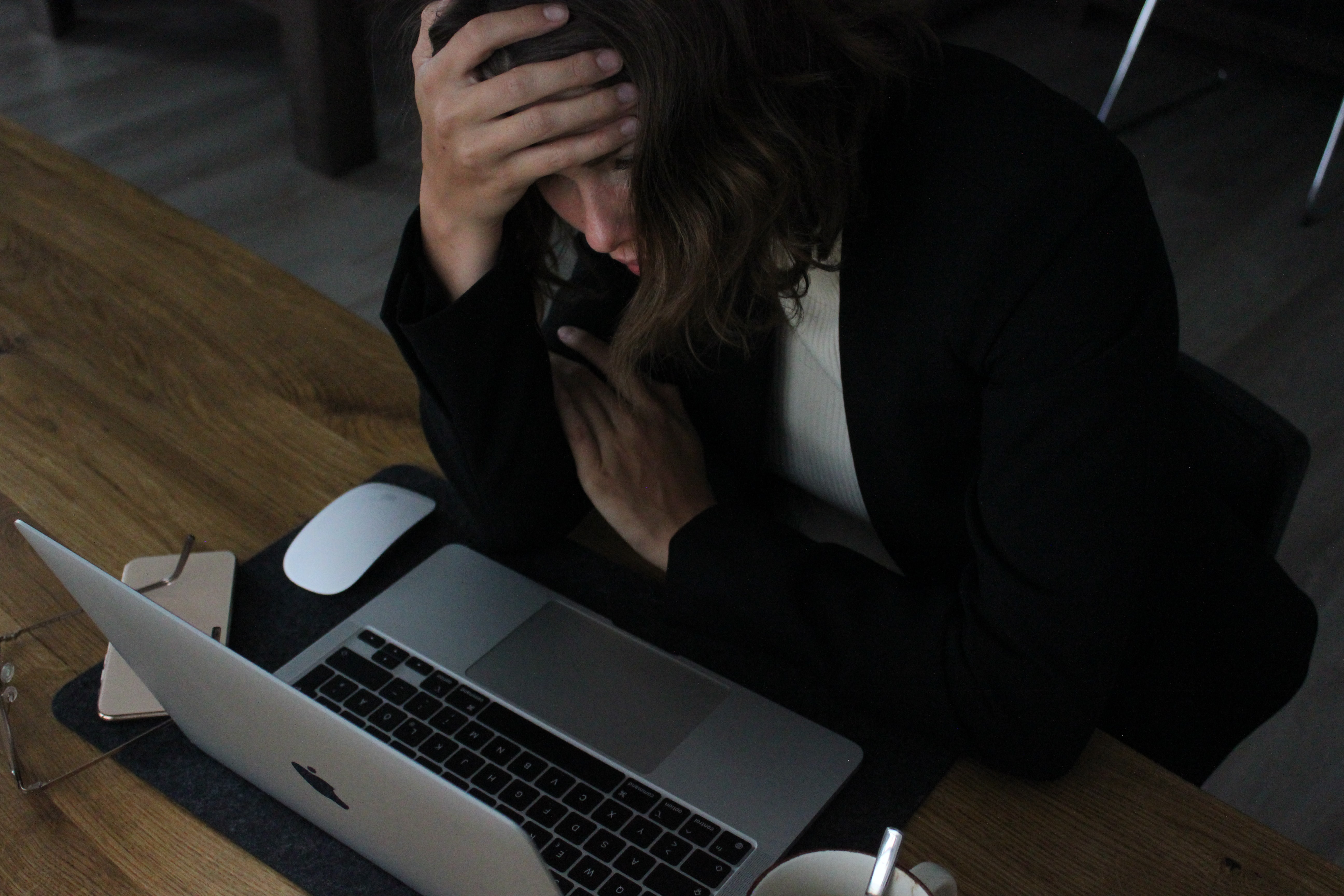 Approximately 80% of startups survive the first year. This figure might be surprisingly high considering the widespread view that most businesses fail within the first few months. Here are 7 key mistakes you should avoid when managing a D2C brand. 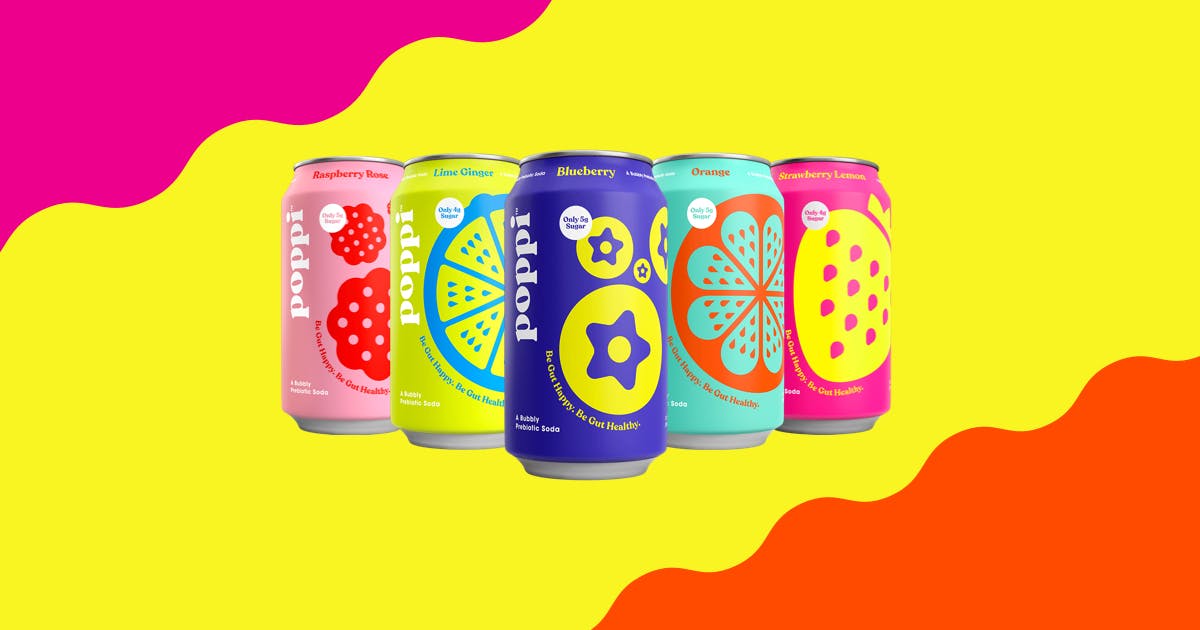 Five Things I Love About Poppi

Walking the aisles of a grocery store can be a bit intimidating, especially the specialty beverage isle. I don't know about you, but all the different colors, cans, and flavors all start to blend together and I end up walking away with nothing. But Poppi was a brand that always caught my eye.